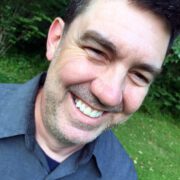 I have had a life-long passion for drawing, creating and self-expression. Growing up in Elkton Maryland, I was always drawing for my friends and family. After high school I took Jazz History and Drawing classes at the local Community College. Eventually some friends, and my parents, persuaded me to attend Art school, which I did. I moved to Philadelphia and attended the Art institute, where I met my wife, soulmate and occasional creative partner Debbie.

Upon graduating, I began working at a local Art Gallery as a framer. The master framer at the gallery persuaded me to begin creating 3-dimensional ink and watercolor paintings of Philadelphia street scenes to be matted and framed in deep frames for sale in the gallery. Eventually we started having shows at local restaurants, banks, and boutique galleries. Commission requests started pouring in after being included in the Rittenhouse Square Fine Arts annual in 1988 and 89. But I began to tire of the specific customer requests of what to draw and paint, and the tediousness of cutting and assembling all of the pieces. I did produce 2 of the artworks in limited runs, by silkscreening the line drawings onto watercolor paper and then hand coloring.

By the end of ’89 I had decided to paint only and abandoned the 3-d ink and watercolor routine. I began painting medium and large canvases in acrylic and occasionally in mixed media, by xeroxing my own photography, pasting on the canvases and painting over. I had only an occasional show of my acrylic paintings in the 90s, as Debbie and I were focusing on our band, our fanzine, and our professional design careers. I began taking classical piano lessons at Settlement Music School and continued for 2 years until our time in Philly came to an end.

In the early 2000’s we relocated back to Deb’s hometown in the Lehigh Valley. I abandoned acrylic paint and began painting in oil only. My oil paintings began evolving, initially from live figures or photo reference, but eventually live model opportunities became infrequent as we got busy with raising a family. I also came to a decision that I would no longer lean on photo reference, and decided that my painting would for now on be inspired only by images summoned from my own imagination and I have since embraced abstract expressionism usually “warming up” with a rough idea in an ink sketch – before putting paint to canvas.

As my musical career seems to be fading to the background, I now focus on my family, my artwork, my multimedia studio, and my time outdoors.